(CNN) — What do you do for ultimate bragging rights when you’ve already visited the Grand Canyon, the Great Barrier Reef, the Serengeti and the Giza Pyramids?

You go see them all again — but from the edge of space.

Stratospheric ballooning company World View has just opened up reservations to get in line for epic five-day balloon voyages that promise to take travelers 100,000 feet above some of the most magnificent landmarks on the planet.

Want to check whether you can see the Great Wall of China from space? World View’s goal is to be able to let passengers discover it with their own eyes.

The company’s first commercial flights are slated to begin in early 2024 — with Grand Canyon National Park as the location for its first spaceport — and trips are priced at $50,000 per seat.

The company claims in its press release that “the World View space tourism experience is the most affordable, longest duration and most accessible space experience on Earth.”

Based out of Tuscon, Arizona, and headed up since 2019 by former Insitu CEO Ryan Hartman, World View has ambitious, pan-global plans.

After an Arizona opening for its first spaceport at the Grand Canyon, its next targets are — in order of projected opening dates — the Great Barrier Reef in Australia, the Serengeti in Kenya, the Aurora Borealis in Norway, Amazonia in Brazil, the Giza Pyramids in Egypt and, finally, the Great Wall of China in Mongolia.

These are the locations World View is calling the “Seven Wonders of the World, Stratospheric Edition.”

The idea is that flights will take off from these premium locations and lift eight passengers and two crew members up to 100,000 feet altitude, about four times higher than a standard commercial airplane flight, and nearly 23 miles into the stratosphere.

They’ll zoom on up there in a zero-pressure balloon and pressurized space capsule, which will then gently float in the atmosphere, allowing guests to experience the Earth’s curvature and the awesome darkness of space.

Each trip on board the craft will last six to 12 hours, during which time guests can enjoy the inflight dining and bar and internet data connection, make use of the inflight concierge, check out the Earth-view cameras, star-view telescopes and individual viewing screens, or just chill on the fully reclining seats.

It’s all part of what promises to be a five-day immersive experience during which participants will be offered trips out from the spaceports to explore the local wonders at ground level.

Hartman tells CNN that this might include “helicopter tours, hot-air balloon rides, high-dining experiences and many other excursions.”

Making the world better — but from space

It’s not just World View’s ambitions — or indeed its balloons — that are lofty. It has rather grand ideas about the impact of its space tourism jaunts, too.

By bringing “as many people as possible to the edge of space,” the company’s declared hope is that “they’ll see a world without borders or species and come back driven to make the world a better place.”

Okay. Well, the world is already struggling pretty badly and nothing else has worked yet — so we may as well give the stratospheric thing a shot?

World View has backed up this mission by pairing with nonprofit Space For Humanity for its inaugural flight.

Space for Humanity will select citizen astronauts through a review process, after which they will receive specialized training, chiefly to do with how they’ll use their experiences in space to tackle challenges they face as leaders back on Earth. The nonprofit will cover all the citizen astronauts’ expenses, which will be paid through the organization’s fundraising efforts.

As for everyone else, paying participants are now able to reserve their place in line for commercial flights with an initial deposit of $500.

Space Perspective is a human space flight company with bold ambitions to take paying customers to the edge of space, for a hefty price tag. Tickets are now available for flights starting in 2024.

World View isn’t the only company to have entered the balloon space race. Its top competitor is Florida-based Space Perspective, which also hopes to start balloon flights aboard its craft Spaceship Neptune in 2024 — although it’s priced considerably higher, at $125,000 a seat.

Space Perspective was founded in 2019 by two of World View’s co-founders, Taber MacCallum and Jane Poynter.

You see, this isn’t World View’s first time at the space rodeo. Back in 2014, it was also chasing the space balloon dream with its Voyager craft, although tickets back then were $75,000 — not that the project came to fruition.

Hartman, World View’s CEO of two years, tells CNN Travel that affordability and accessibility are at the core of their 2021 offering. “$50,000 is still a lot of money. But it’s our starting point. And to assist customers in achieving their dream in participating in space tourism, we are offering flexible financing.”

Global Marketing Manager Phil Wocken explains a little more about how they chose that price point. “We feel that it is critical to keep the cost low enough to be as affordable to as many people as possible. Financing options just don’t exist in the $75-125K+ range.

“We’ve also chosen helium instead of hydrogen as our lift gas, which costs 10 times more than hydrogen, but we felt it was an important sacrifice as we prioritize the safety of our flights.”

Hydrogen has a worse track record for safety — famously, the Hindenburg airship was powered by it — but helium is also a non-renewable resource that is needed for critical medical applications. Its rival Space Perspective has chosen to go with hydrogen.

Says Wocken, “Because we have already developed a lot of the technology for our flights based on years of experience, and we’re well-funded, we don’t need as much money for new research and development.”

This year there are been edge-of-space missions galore, with Elon Musk’s SpaceX, Jeff Bezos’s Blue Origin and Richard Branson’s Virgin Galactic all striving to go zero-gravity.

With World View once again throwing its hat in the ring, the stratosphere is threatening to get a little busy.

What regional chains would you like in Cincinnati? Your answers

Fri Oct 15 , 2021
With the news of Roy Rogers’ return to Greater Cincinnati, we had a question rumbling: What other regional chains would you like to see come to the Queen City? And Enquirer readers came with lots of ideas. The suggestions on our Facebook and Instagram pages ranged from popular fast-food restaurants to […] 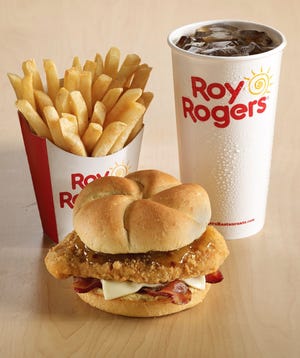