The spread of COVID-19 has fundamentally disrupted everyday life for millions of people throughout the world. For many, travel plans have been canceled or delayed indefinitely. However, if there were a way to explore exotic places from the comfort of your own home, would you do it?

The global pandemic has given rise to innovation within the travel space, and the answer to some travelers’ wanderlust woes may come in the form of virtual tours. This means of cultural immersion has garnered renewed interest as many people want to experience sightseeing but cannot during this continued period of isolation.

All throughout social media there are guided events being advertised that promise to give participants a glimpse of some of the best museums, historical sites, and travel destinations the world has to offer. Moreover, there are many tours that are being offered at little to no cost by well-known and trusted organizations.

Girl Travel Tours (GTT) is one such organization that initially offered Girl Scouts and their families and friends chaperoned international service-learning trips each summer. Eventually, GTT transitioned online and began offering virtual tours to anyone interested in travel.

During the beginning of the pandemic, GTT group leader, Marah Walsh, saw tragedy impacting the lives of so many people and witnessed many of her friends “making masks and collecting cleaning supplies to distribute.” It wasn’t long before she felt that she had to do her part to help those in need of a fun distraction.

“I really wanted to do my share and volunteer in some way to help the greater good during this time of so much sadness and emotional struggle,” Walsh said. “And as a business professional and volunteer adult Girl Scout, who has a marketing background and understands technology pretty well, I thought this may be something I could do to ‘make the world a better place’ during the lock-down.”

Walsh also says that the appeal of virtual tours comes from the participants’ lack of interactivity during the pandemic and that virtual sightseeing is just one more option to provide a relaxing and educational escape.

Some of the more popular virtual destinations have been the Amalfi Coast, an African safari, and the Highlands of Scotland, according to Walsh, who has acted as a guide to these destinations.

“It also offers professional guided tours of many regions people may have on their bucket list or may never get to but have an interest in learning about,” Walsh said. “My tours are educational in nature. A blend of history, culture, and fun.”

Virtual tours, like those that Walsh leads, are being advertised on Facebook and via e-mail and are generally offered as Zoom webinar events. Live streams are hosted on Facebook and those interested can also gain access to recordings of destinations that they can enjoy on their time and at their leisure.

Walsh’s tours are offered for free to the public with a “pay-as-you-wish” model in place for those participants who wish to contribute monetarily.

“I want to be sure people can afford these tours,” Walsh said. “I believe those that can tip will and those that can’t will pay it forward in their life when they are able.”

Janet Larson, a New Jersey resident, is an avid traveler who has been drawn to virtual tours during the pandemic and has experienced some of the programmings that Walsh has offered through GTT.

She first heard about virtual tours on Facebook after a friend of hers showed interest in a virtual tour of a road trip from Pompeii to the Amalfi Coast back in September 2020, just a few months after the first confirmed cases of COVID-19 in the United States.

Since watching her first road trip virtual tour with her husband, Larson continued her journey by watching “a dozen more live virtual trips” as well as “a few of the previously recorded ones.”

“It’s a great way to escape for a night of travel to places we’ve been or would like to go to in the future,” Larson said. “For future travel, it also provides a wealth of information from local tour guides about the history of the area as well as interesting things to see and do that could easily be missed on your own.”

Larson and her husband returned from a cruise leaving Barbados traveling to the Netherland Antilles just before the COVID-19 shutdown. She says that the pandemic had affected their travel plans until very recently. Believing that she and her husband would be getting vaccinated early due to their age, Larson booked a trip to Florida in February and kept to her travel plans despite not getting vaccinated.

“Even though shots were not available to us, we went ahead with the trip, being extremely careful following CDC safety recommendations,” she said. “Hopefully, we will be traveling this summer to Europe with GTT, which was scheduled last year during the pandemic.”

In Europe, tourism has been hit particularly hard, according to Elena Salerno, a local guide based in Italy who has partnered with Walsh on a number of tours.

Salerno has been working as a tour director for eight years and was originally a culinary professional before moving to Rome. Almost 10 years later, she is still working at the same tourism agency and is enamored with her role there.

Consequently, the pandemic has weighed heavily on her.

“The emergency arose with the COVID-19 outbreak impacted every one of us and most economic sectors, but tourism was definitely hit the hardest,” Salerno said. “Working as a freelancer I am at a particular disadvantage, as everyone in my same position within the [travel] industry.”

The young tour director also says that she hasn’t been working in person with clients since the beginning of January 2020, and as a result, has been living for more than a year without a regular income.

Virtual tours, according to Salerno, have provided her and others in the industry space with some income, and that virtual vacations are being embraced by those who host the events as well as those participants who ultimately find value in them.

“Personally, virtual tours have been a lifeline this past year, and my only source of income, albeit occasional. But it hasn’t been just about the money,” Salerno said.

“It gave me the chance to do something that resembles my actual job, which I miss terribly; it has put me in contact with some great people from all over the globe; it has been an occasion for learning tons of new things about places I have been visiting for years. Overall, it has been a very pleasant surprise,’ she continued.

Salerno works with a company that organizes trips for high schoolers and their teachers and says that a lot of the adolescents she works with come from small towns and have often never traveled before. Additionally, Salerno says that some of her foreign clients may feel overwhelmed upon arrival in Europe for the first time.

“…with everything around them so different from what they’re used to, and having to make new, sometimes scary experiences [the trip is] completely out of their comfort zone,” Salerno said.

“Watching them gain confidence as the days go by, develop a deep desire to travel the world and widen their perspective onto it, knowing you are partly responsible for this change is extremely rewarding,” she continued, “And I must admit that when you are part of the moment when a kid gets to see the sea, or the snow for the first time in their life, well that’s pretty awesome!”

When it comes to virtual tours, Walsh hopes that participants continue to look forward to joining her and GTT in their weekly virtual tour series and that they get some value out of the experience.

“I hope the excitement built from attending my virtual tours encourages participants to bridge the gap from virtual tours to physical travel when we are able to go!” ■

The Virtual Vacation: Around the World in Your Easy Chair

Mon Oct 4 , 2021
“It looks like the edge of the world out here,” my wife, Holly, mused, not disapprovingly. Our picnic blanket was spread out on a high cliff, with green-capped rock stretching alongside us, endless blue ocean in front. It was the first of many leisurely breaks we would take on our […] 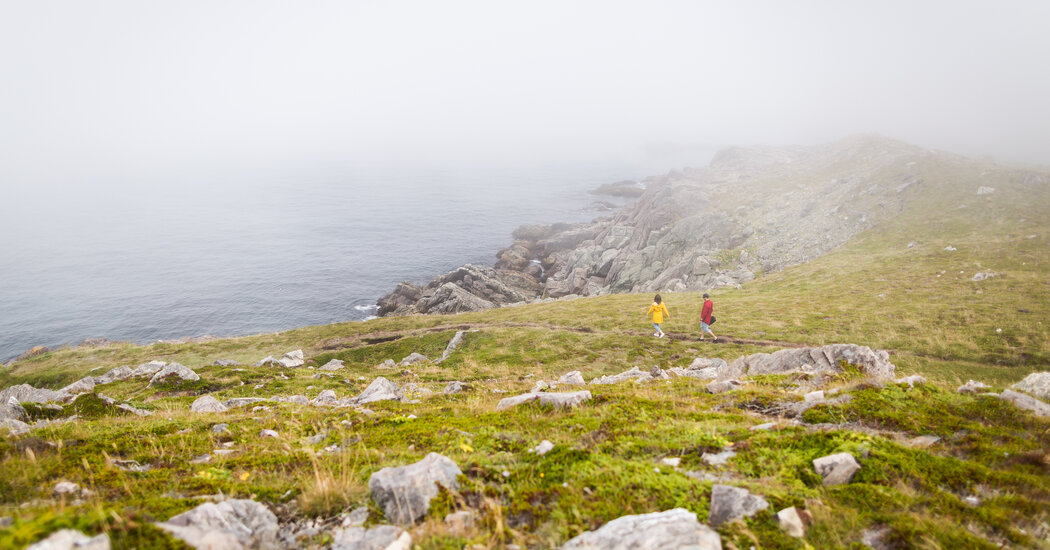