The money will come from the American Rescue Plan Act, which was signed into law in March 2021 and provides $350 billion in funding for state and local governments. The federal government says those funds should only go toward non-recurring costs rather than new programs that require ongoing financial support.

“It seems like an incredible opportunity for Kansas City — to help us build an international presence,” said Sen. Lauren Arthur, a Kansas City Democrat, who worked to secure the funding after speaking with local leaders who stressed the project’s importance.

Kansas City has been without a transatlantic flight since Icelandair left the city in 2020. It provided service to Keflavik airport near Iceland’s capital city of Reykjavik, allowing Kansas City passengers to connect to various cities across the European continent.

Airport officials have worked for years to recruit another carrier but so far have not had the large cash subsidies that other mid-sized airports have wielded to lure overseas carriers.

The FAA restricts airports from handing over cash directly to airlines, so the money will have to be funneled through another agency, likely the Missouri Department of Economic Development. Officials with that state agency said it was too early to answer questions about the program.

Creating a state fund to lure international flights has been a legislative priority of Kansas City for the past several years.

“It has been a priority of our business community and I think our city writ large for years,” said Kansas City Mayor Quinton Lucas.

He said an international flight, to Europe or the Southern Hemisphere, would boost revenues for the city as more people across the region fly in and out of KCI. The mayor also believes more international connections will help the city make the case for business expansions or headquarters relocations.

“Look, we’re a major city,” he said. “We have to be the type of major city people can get to quickly and people talk about.”

Lucas said talks are already underway with an airline considering a new route from Kansas City. His hope is that the subsidy can help lure a long-haul flight, but that it will prove profitable over time and not require ongoing financial support.

That should be easier with the city’s new $1.5 billion single airport terminal that’s set to open in early 2023. He envisions the new terminal, paired with more international destinations, to lure travelers across the Midwest.

“I would expect us to build up that as a business case long term. We will have a new international airport, stronger aviation lounges, more opportunities for entertainment,” the mayor said. “I see us competing with O’Hare, competing with Detroit-Wayne County airport, competing with Minneapolis-St. Paul airport.”

In 2019, before the pandemic, Icelandair announced it would end its seasonal service from Kansas City after only two years of operations. The carrier cited “commercial reasons,” but never gave much explanation for its decision to withdraw.

Airport leaders worked a decade to land that route, which was Kansas City’s first and only transatlantic flight. Since then, airport officials have targeted major European hubs like Paris, London and Amsterdam.

Officials at Kansas City’s aviation department say KCI is one of the cities with the most demand for European flights without nonstop service. At peak pre-pandemic levels, some 800 people flew to Europe each day from Kansas City in the summer of 2019.

Since then, those numbers have dropped significantly as overall air demand has dropped and airlines have reduced flight capacity. Last year, an average of 129 passengers began transatlantic trips to Europe or Africa from Kansas City, according to KCI officials. Transatlantic demand peaked at 164 passengers per day last July.

Prior to the pandemic, KCI boasted direct flights to Canada, the Dominican Republic and two destinations in Mexico. Currently, several airlines offer direct service to Cancun and Air Canada will restart its direct flight to Toronto on June 3.

While the state specifically set the money aside for KCI, lawmakers say it could go to help another cities’ efforts.

“I would love to see Kansas City get a direct flight, but if St. Louis has a fantastic proposal suddenly, there’s nothing that prohibits them from looking at this pot of money,” said Sen. Greg Razer, a Kansas City Democrat.

The St. Louis scenario seems unlikely since St. Louis just landed a direct flight to Europe on a major carrier.

Razer said the state could use the funds to provide a loss guarantee to an airline or could help with efforts to market a new international route.

“We wanted to make sure that funding was there in case that opportunity presents itself,” he said. “The funding is there to show an airline…that the state of Missouri is there.”

Airlines naturally create routes to big hub airports like Dallas, Atlanta and Los Angeles. But smaller airports often have had to set aside incentives to lure airlines to less proven markets.

St. Louis, for example, committed up to $5 million to win direct service to Frankfurt from Lufthansa, Germany’s largest airline. The St. Louis County Port Authority, regional business group Greater St. Louis Inc. and several of its corporate members put up the funds. Lufthansa will earn that money over two years if it maintains an average of three nonstop flights per week from St. Louis Lambert International Airport, the St. Louis Post-Dispatch reported.

That strategy has been used by several airports that don’t boast the service of major hubs.

In January, Cleveland airport officials announced plans to raise funds from local businesses to offer incentives for European flights to Cleveland Hopkins International Airport. In 2018, Pennsylvania’s economic development agency committed $3 million to British Airways to launch a flight from Pittsburgh to London’s Heathrow Airport after a 20-year hiatus in service. And the Indiana Economic Development Corporation in 2017 offered Delta up to $5.5 million to launch a nonstop flight from Indianapolis to Paris.

While not nearly as large as other incentive packages, Kansas City did provide inducements to Icelandair.

The airport waived about $172,000 in airline fees and provided about $250,000 for cooperative marketing efforts with the airline. Additionally, the Kansas City Area Development Council and the Greater Kansas City Chamber of Commerce put up an undisclosed amount of cash to pay Icelandair if the airline lost money on the route.

Kevin Hardy covers business for The Kansas City Star. He previously covered business and politics at The Des Moines Register. He also has worked at newspapers in Kansas and Tennessee. He is a graduate of the University of Kansas

It is not every working day a 665-foot cruise ship docks in Detroit: We went aboard

Tue May 10 , 2022
DETROIT – A whole lot of people today pulled their automobiles over in Detroit to get a glimpse of something they really don’t generally see. A 665-foot long cruise ship docked on the Detroit River on Tuesday, Might 3 as it produced its very first voyage about the Wonderful Lakes. […] 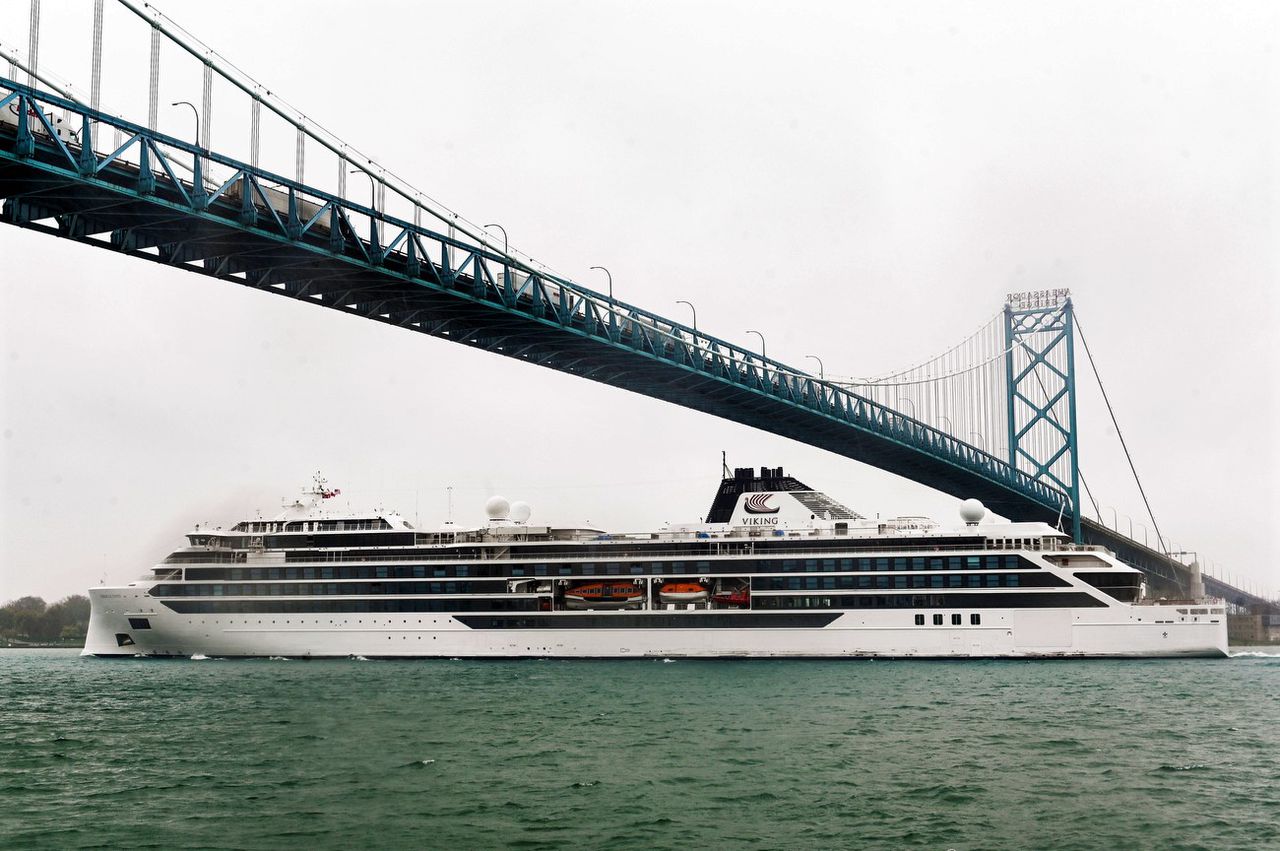