Scheduled international passenger services have been suspended in India since March 23, 2020, due to the coronavirus pandemic. However, special flights have been operating since July last year under bilateral “air bubble” arrangements between India and approximately 28 countries.

“He (Scindia) is taking a leadership position in addressing the concerns of the overall industry. The partnership that is developing between the industry and the ministry is a very promising trend,” Dutta told PTI in an interview.

IndiGo is currently operating around 1,150 flights daily, of which 70-75 are international ones. The rest are domestic services.

Dutta said it is not up to India to unilaterally open up scheduled international flights and the other countries have to agree.

“There are, of course, health concerns, which I won”t minimise in any way. Different countries are on different points of managing COVID-19. Then all these testing issues are sort of confusing the passengers,” he added.

The IndiGo CEO said he doesn”t think it is practical to open up and go for scheduled international services in one big bang.

“But I think this process of let”s have more and more bubble flights and increasing it slowly is a good graduated way of opening up. We did it domestically also, right? We started from 33 per cent, went to 50 and then further. So, a graduated approach is a good approach,” he said.

When India resumed scheduled domestic flights on May 15 last year after a two-month lockdown, airlines were permitted to operate just 33 per cent of their pre-COVID domestic services. This cap has been gradually increased and stands at 72.5 per cent currently.

“We want more and more countries to open up (for air bubble flights). The fact that the UAE and Doha (Qatar) have opened up is good. Bangladesh just opened up, but only with a few flights,” Dutta mentioned.

A few more countries need to be opened, for example, Saudi Arabia and Thailand, he stated.

“Why aren”t those opening up? We are also talking to the Civil Aviation Ministry regularly on this and we are saying that please give us some more countries. We are fine with the graduated approach,” he noted.

The CEO said he is quite encouraged by the demand for charter flights.

“These charter flights are to places that we would not have believed, such as Italy, Kazakhstan and the Philippines. We didn”t fly to these places on a scheduled service basis. Domestically, we have these wedding charters,” he stated.

Before the pandemic, we did not fly any charter flights, Dutta clarified.

“Now, there are some months when we have done 1,500 charter flights (passenger and cargo combined) per month. I think that was the peak that we have seen,” he mentioned.

Dutta said the competitive landscape of the Indian aviation industry is clearly getting more intense.

“Similarly, Akasa will be an intense competitor. There is a talk of a revival of Jet Airways too. So, we have a lot of competition,” he stated.

Akasa is backed by ace investor Rakesh Jhunjhunwala and has former IndiGo president Aditya Ghosh on board. It aims to start operations by the summer of 2022.

Jet Airways will restart domestic operations by the first quarter of 2022 and short-haul international flights by the last quarter of the next year, Jalan Kalrock Consortium, the winning bidder for the grounded airline, stated on Monday.

Dutta said: “Our view is we can”t worry much about what is this airline doing and what is that airline doing. We have to focus on what are we doing, which is that we want to continue to be one of the lowest cost airlines in the world.”

“We have a lot of focus on cost reduction. We are more fuel-efficient than we ever were. Our employee cost has also decreased. That is painful but it has gone down a bit. And we are reducing cost in every function in which we can. So, getting the lowest cost is the number one requirement,” he noted.

The second is that IndiGo should provide the best service, he said.

“Our customer service is world-class — whether it is on-time performance, customer complaint resolution ratio, etc,” he mentioned.

The third one is the best network the airline can provide, he said, adding, “Our network is really geared to what we think is the new emerging trend of first-time flyers.”

“These are our three lines of defence. These are the three things we are focusing on,” he added.

Financial bids for Air India are likely to be received from qualified interested bidders (QIBs) by September 15 this year, Minister of State for Civil Aviation V K Singh had said in July.

The Centre had invited Expression of Interests (EoIs) for Air India on January 27, 2020. The last date of submission — after multiple extensions due to the COVID-19 pandemic — of EoIs was December 14, 2020. PTI DSP NSD


Disclaimer :- This story has not been edited by Outlook staff and is auto-generated from news agency feeds. Source: PTI

Fri Sep 17 , 2021
The first passenger flight to leave Afghanistan since the frenzied U.S. military evacuation ended late last month arrived in Doha, the Qatari capital, on Thursday with more than 100 foreigners, including Americans, aboard, and Biden administration officials said they expected more such flights in coming days. “We can confirm that […] 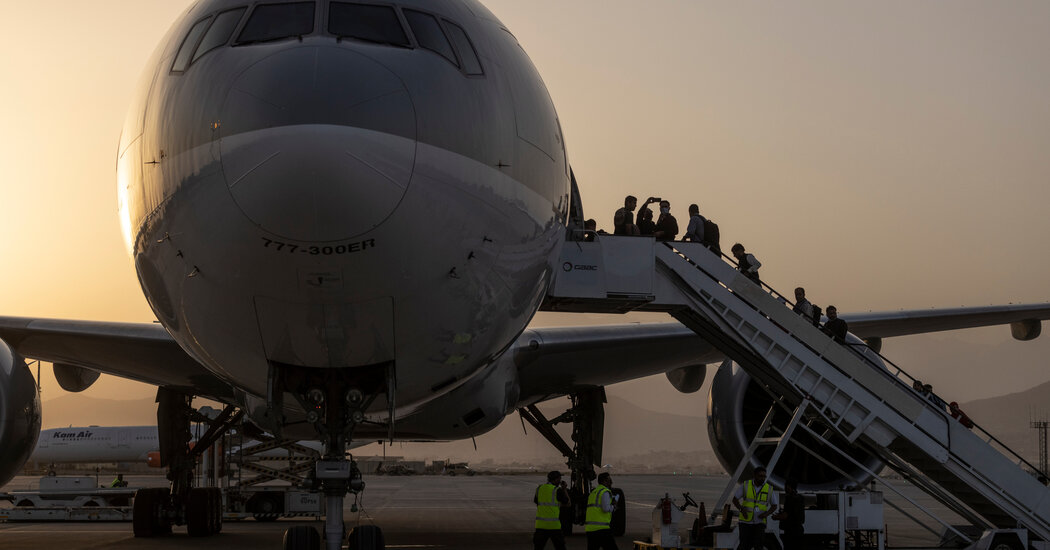